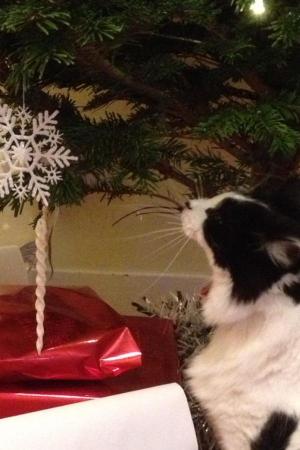 Once a year, the Feeder and the Woman bring a murdered tree inside the house.  They parade it through the dining room into the lounge with “Look, Bear! A tree!”  They attach it to a metal stand and leave it there for a couple of days.  I am told not to chew it.  I chew it anyway.

On the second or third day they go into the SCARY LOFT and bring down boxes.  You must run away from these.  Humans do not have claws so I do not know how they grip such large items.  They could drop them on us.  These boxes contain strange things.  Shiny round things with small strings.  String that is fluffy and glittery all at once.  A weird cuddly toy dressed as a fairy.  Tangled wires that light up.  It is witchcraft.

They then proceed to mock the dead tree in the lounge.  They dress it up like some weird trophy with the lights on a string and the fluffy glittery string.  Did they kill the tree though? Are they capable of killing a tree?  I doubt it. They add the sparkly weird ball things to it too.  I am told not to molest these.  I will wait until they go out and knock the ones I can reach to the ground and kick them under the sofa. 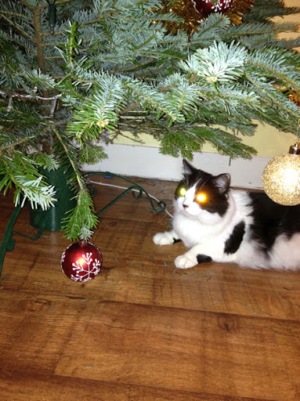 They wrap things up in shiny paper and put them under the tree.  Maybe an offering to the Tree Gods as repayment for their tree murdering sins. They also “decorate” with weird odd shaped sacks called “stockings”.  The Humans get ones of these each.  I have to share mine with my sister.  This is unfair, cruel and against my rights as the Alpha Female of the house.  They fill them with small things wrapped in more shiny paper.

The Humans will be at home at strange times during the day, go to bed a lot later and wake up even later than normal.  This will undoubtedly affect your normal feeding routine, regardless of them putting enough food down for you and a marked increase of Dreamies throughout the day.  Make this well known to The Humans that this is, in fact, unacceptable. 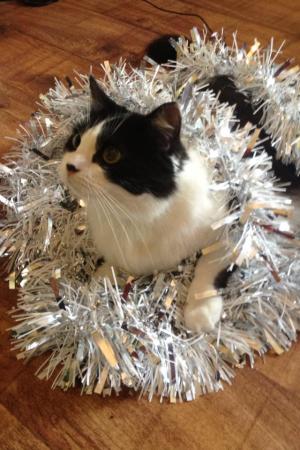 The Woman and Feeder drink a thing called Mulled Wine.  It smells terrible.  I think it posions their minds into thinking that we do, in fact, need a hug.  I do not need a hug. Nor do I need dressing up.

Then one morning, they will get up and open some of the things they wrapped in the shiny paper.  They say “thank you” a lot.  They wave things in front of my face and open them too.  Sometimes they contain Dreamies.  Sometimes they do not.  My sister will come and play with the wrapping paper.  I will not lower myself to such frivolities.

The Humans will then take the rest of the shiny wrapped things away for a few hours then return with bags of “gifts” then return to cook the mother of all roast dinners.  They use the fancy tableware.  My sister will harangue them for bits of turkey but I will tell her “Only eat it if it is warm. If it is cold; they do not love you”.  She understands this.  I think.

They will then sit down.  Drinking more poison and eyeing me up for a hug.  Sit with them on the sofa, just out of arms reach so they don’t wrap you in fairy lights.

2 thoughts on “Blogmas Day Eleven: A Cat’s Guide to Christmas”